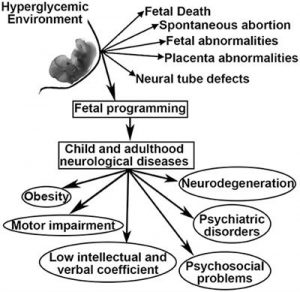 Infants of diabetic mothers (IDMs) are at increased risk for cognitive impairments, possibly due to alterations in fetal brain growth and development. The purpose of this longitudinal study is to evaluate the neural bases of cognitive impairments in IDMs. In this first phase, we evaluated neonatal brain function in 21 IDMs studied at term compared with 22 full-term, healthy control infants using event-related potentials (ERPs).

The ERP technique is an electrophysiologic method which can be used to study regional brain function and cognitive function. Brain activity was recorded over midline and lateral scalp sites while infants were presented with two sets of stimuli designed to evaluate auditory brain maturation cortical responses to speech and non-speech stimuli. Auditory recognition memory was evaluated using voice recordings of each infants mother and a stranger (both said baby). Each set of stimuli was edited to the same duration and peak sound level and represented 100 times. Artifact-free raw data were averaged together for each stimulus: the speech and non-speech sounds, mothers and strangers voice.

Average ERPs were analyzed by integrating the areas under the curve over time. Maturational scores were assigned on a 1-5 scale for the speech and non-speech ERPs (Kurtzberg, et. al.). Areas were compared for the mother and stranger ERPs using ANOVA. Normative patterns were established by the controls and used to assess the ERPs obtained from the IDMs.

For the speech and non-speech ERPs there were no differences between the IDM and control groups. For the mother and stranger ERPs, the normative pattern established by the control infants (in this study and other studies) was increased negativity for the stranger ERP over the midline and right later scalp sites, 1200-2000 msec post-stimulus (p<.05). 57% of the control infants, but only 19% of the IDMs (p<.05) manifested all features of this pattern. Stranger ERPs differed significantly between the IDM and control groups (p<.05), but mother ERPs were similar.

These data suggest that auditory recognition memory may be impaired in IDMs at birth. The impairment may be in the detection and processing of new information (e.g., the strangers voice) rather than in long term memory (e.g., the mothers voice). The differences between the IDM and control groups did not appear to be simple maturational lags as maturational scores were similar between groups