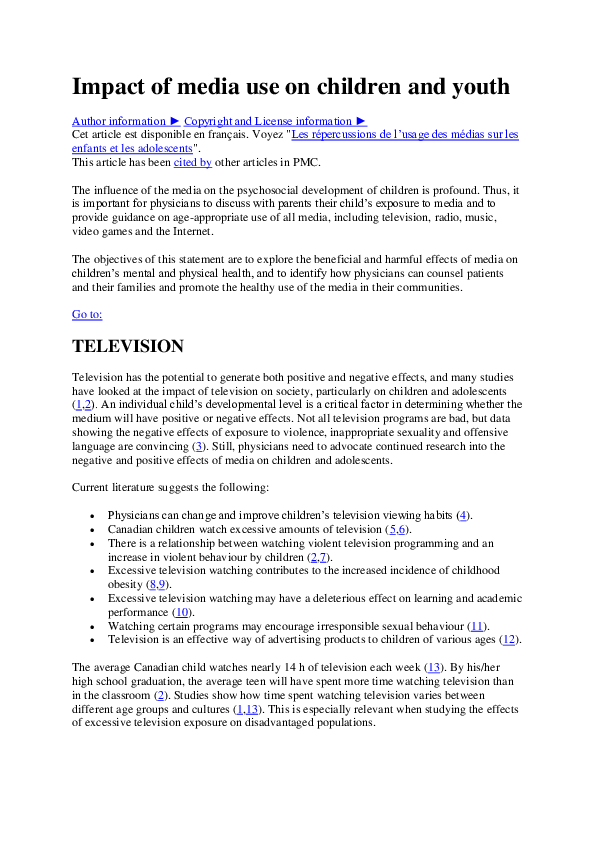 In this day and age there are many factors that affect the development of America's youth, many of which were not present as recent as fifty years ago. Perhaps the most prevalent of these factors in today's society are music and television. Although music has been around for centuries and television for the past sixty or so years, the post modern era has seen a dramatic change in pop culture which has made many Americans, including children, dependant on these two entities. Although the original intent of both music and television was the spread of culture and information, today's media and pop culture can be very detrimental to the development of children. Despite the fact that musicians such as Beethoven and Bach are seen as geniuses, the music of today can be said to be destroying the foundation which it was built upon. Television, once a source of information and learning, is now satirically referred to as the "boob-tube," describing the lack of intelligent thought needed to comprehend what is going on on-screen. With the information age in full swing, it is a wonder how so many American citizens can turn a blind eye toward the two most detrimental factors of our culture today.

The effects that music has on childhood development can be placed into two categories: physiological and societal. From a physiological perspective, it can be said that music links the emotional, spiritual, and physical elements of a child. According to O'Donnell, "Rhythm organizes physical movements and is very much related to the human body" (Music and the Brain). Think of all the rhythms that we go through on a daily basis: our heart beating, our walking pace, speech, etc. This is just a small example of how music is an almost natural part of human development. As stated before, classical musicians were seen as geniuses, both during their time as well as today. Studies have shown that their music causes a relaxation of blood pressure and heart beat, in turn heightening concentration and information retention. Furthermore, music has a dramatic affect on the amplitude and frequency on brain waves. Such classical music affects both sides of the brain equally, which maximizes learning potential as well as brain development. Although there are many beneficial effects of music on the physiological development of a child, there are, of course, detrimental effects as well. The second half of the 20th century saw a distinct shift in what was considered "popular music." Classic rock bands such as The Doors, Pink Floyd, and Led Zeppelin, whose music at times was very randomized and out of sync, began to emerge. The outright bizarre rhythms of some of their songs has been proven to weaken the muscles of the body and cause the brain's hemispheres to act out of sync, ultimately being hazardous to the development of the brain and body. Furthermore, as should be obvious, shrill frequencies are detrimental to the organs of the ear, which could lead to premature hearing loss. As is now clear, music affects many factors within our body as we grow into adults in a myriad of different ways. In addition to the physiological affects music has, the music of today may affect the societal development of America's youth. The cultural aspect of music, especially within the past forty years, has grown almost exponentially. Today's youth deems alternative bands and rap artists as popular. Although identifying with certain lyrics may be seen as a type of creativity, some of the music of today should not be heard by young children. Sexual innuendos, racism, and violence are the topics of many rap songs, and suicide and drug use is prevalent in the songs of many alternative bands. This cannot be good for the developing mind to hear! The more such negative topics are pushed to the forefront, the more problems America will face in the future. Music that is seen as wholesome is viewed as "uncool" by children. Kids will like a band until they realize their songs have Christian undertones and throw all the albums in the garbage. In dealing with the effects music has on society, it is hard to tell if a happy medium will ever be reached.

Although technologically "younger" than music, television is perhaps the most influential form of media in America today. As with music, the influence television has can be detrimental or beneficial, depending on the circumstances. Also, television affects the development of a child's intelligence, as well as his or her habits as the child matures. The amount of television watched by a typical American child today is staggering. According to an article on www.mediafamily.org, American children watch 25 hours of TV a week, and one in five children watch more than 35 hours per week (Media Family). Furthermore, they spend more time watching TV than doing any other waking activity. This leads into the fact that, of course, children have taken to watching TV, a passive activity, and left engaging activities, such as reading or drawing, behind. As with all habits of childhood, television watching routines will almost surely follow one throughout his or her lifetime. In 2nd grade, in which children are given an hour of homework at maximum, watching two to three hours of television a day may not seem like that big a deal. However, in 6th grade and beyond, when students get two to three hours of homework a day, their routine falls apart. Sadly, many children shrug off the homework in order to get their "television fix," rather than the other way around. If this is not the case, children will often just stay up later to watch their precious television. The content viewed by children is as important as the amount of time spent watching. Educational programs such as Sesame Street are very beneficial to the developing mind of a child, and set the stage for success in higher grade levels. Children who viewed these programs showed higher pre-reading skills by age 5. On the opposite end of the spectrum, children who were allowed to watch an excess of cartoons that hold little or no educational value show a lower than average score on pre-reading tests (Media Family). The neural networks of the brain are dramatically affected by excess television viewing during development, especially from ages 3-5. Cognitive development, therefore, is affected by physiologically and psychologically.

The affects that music and television have on childhood development has always been debated. However, it is clear that an agreement will never be reached. There are many beneficial aspects of both, and there are many detrimental aspects as well. As with all things, moderation seems to be the key to reaching the maximum potential of a developing mind. If moderation and parental supervision is present, the detrimental affects of both music and television will surely fall by the wayside, leaving only the good to prevail.